Statin Guidelines: The Past, The Present, and The Future

In May of 2001, the National Heart, Lung, and Blood Institute (NHLBI) published the Adult Treatment Panel’s third addition of guidelines for the identification, evaluation, and treatment of patients with elevated cholesterol. These guidelines essentially focused on titrating lipid therapy based on target LDL-C and non-HDL-C levels. After this publication, the NHLBI reconvened expert panels in 2008 to update the guidelines based on systematic evidence-based reviews. Prior to the release of this update, in 2011 the Institute of Medicine released two reports containing recommendations for developing systematic evidence-based reviews and establishing clinical guidelines. With the release of these new guidelines, the NHLBI partnered with the American College of Cardiology (ACC), American Heart Association (AHA), and other societies in June of 2013 to form an expert panel. The task of the panel was to reevaluate the previously published lipid guidelines using data from randomized control trials.¹

The expert panel was asked to provide new guideline recommendations for treating cholesterol levels in an attempt to lower atherosclerotic cardiovascular disease (ASCVD) risk. ASCVD was defined as stroke, coronary artery disease, or peripheral arterial disease. The expert panel was focused on reviewing data that could be used to identify those patients most likely to benefit from therapy and to design guidelines that would be simple to implement in the clinical setting.¹

Several strategies had been previously used to lower the risk of ASCVD, including treating to target cholesterol level, lowest possible cholesterol level, and various risk-based models. However, the expert panel was unable to find any randomized control trials to justify the use of these methods, and several target levels within dosage titration models failed to account for the potential adverse effects of treatment. In review of the published randomized control trials available, the expert panel was only able to identify the use of fixed dosages of lipid lowering medications as a treatment strategy. Therefore, the panel could not support the previously released lipid guidelines.¹

In November of 2013, the ACC/AHA Expert Panel released a new version of recommendations for treating cholesterol to reduce ASCVD risk. Apart from prioritizing lifestyle modification with diet and exercise, the new recommendations focused on four groups in which evidence suggested the benefit of therapy with statins plainly offset the risk of use. These groups are as follows:

The ASCVD score was based off data from pooled cohorts to provide a 10-year risk for an individual’s likelihood of developing an atherosclerotic disease process or event. Factors included in the scoring calculation included age, gender, HDL-C, systolic blood pressure, treatment of blood pressure, smoking status, and diabetic status.¹

Those individuals over 21 years of age with an LDL-C of greater than 190mg/dL were recommended to be treated with high-intensity therapy. These recommendations were based on the rationale that these individuals may have a genetic hyperlipidemia, and their lifetime risk of ASCVD is high. The expert panel recognized that this particular subgroup had not been included in many of the randomized control trials but included the recommendation based on several studies indicating that for every drop of 39mg/dL of LDL-C, the risk of ASCVD decreased by twenty percent. With this in mind, the panel stated it would be reasonable to use high-intensity statin treatment to reduce the LDL-C by at least fifty percent.¹

For those non-diabetic individuals between the ages of 40 and 75 years of age with LDL-C between 70 and 189mg/dL without clinical ASCVD, the expert panel noted the potential benefit of statin therapy in this group based on risk. The age limits were set based on the limited number of trials including subjects younger than 40 and older than 75 years of age. To further risk stratify individuals, the panel analyzed characteristics of the placebo groups in three large ASCVD primary prevention randomized control trials, which consisted of over 16,000 subjects.2,3,4 Using this data, the Pooled Cohort Equation was used to calculate an individual’s 10-year risk of ASCVD. Further meta-analysis was performed on statin randomized control trials. When analyzed with the 10-year ASCVD risk equation, those with a greater than 7.5% 10-year ASCVD risk showed a large risk reduction with treatment on moderate to high-intensity therapy.1

The expert panel did identify several limitations within the dosing guidelines. Rosuvastatin 40mg, atorvavastatin 20mg, rosuvastatin 5mg, and pravastatin 80mg dosages were not analyzed in randomized control trials, but the dosages had been approved by the FDA. Atorvastatin was analyzed in only one trial at a 40mg dosage, and this was dose was only used if side effects were associated with an 80mg dosage.5

Following the ACC/AHA 2013 guideline release, the United States Preventive Services Task Force (USPSTF) released its own set of guidelines regarding the use of statins in 2016. The USPSTF focused on individuals that were without known cardiovascular disease and recommended low to moderate statin dosages for individuals age 40 to 75 years who had one of the following:

1. One or more cardiovascular risk factor (i.e., dyslipidemia, diabetes, hypertension, or smoking)
2. Calculated 10-year risk of a cardiovascular event greater than 10% (as determined by the Pooled Cohort Equation) 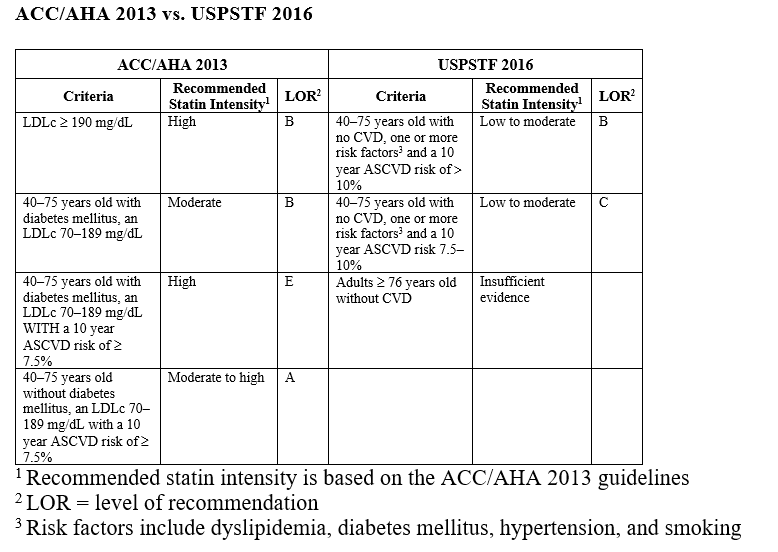 With the discrepancies between different guidelines, studies have been conducted to analyze the potential impact when applied to the population of the United States. One study in particular took data from National Health and Nutrition Examination Survey (NHANES) dataset from 2009-2014 and applied each set of guideline recommendations to this population. Based on this dataset, full implementation of the USPSTF guidelines would result in an incremental increase of 15.8% of the U.S. population receiving statin treatment. This is in contrast to the ACC/AHA guidelines, which would lead to an incremental increase of 24.3% of statin users. This equates to a potential increase of 17.1 million individuals based on USPSTF recommendations versus 26.4 million individuals based on ACC/AHA recommendations, a difference of 9.3 million people.10

Despite the new guidelines from both sets of agencies promoting an increase in statin usage, adaptation of the new recommendations has occurred with mixed results. Several studies have analyzed the impact of ACC/AHA recommendations since their release nearly four years ago. Using pharmacy and medical claims, a large health insurance organization found that half of high-risk individuals were not treated with a statin and eighty percent of individuals 75 years or younger with ASCVD were not receiving high-intensity statin therapy.11 In another study involving veteran patients with ASCVD, there was only a thirty-five percent increase in high-intensity statin use after discharge and even lower rates among Hispanics, Native Americans, elderly, and women.12 Furthermore, an analysis of Medicare beneficiaries who were hospitalized for acute coronary syndrome found that only twenty-seven percent were discharged from the hospital with a prescription for a high intensity statin, and another study demonstrated that even fewer beneficiaries were on high intensity statin therapy 2 years after a myocardial infarction.13,14 One study evaluated over 90,000 individuals with ASCVD diagnoses and found that statin usage actually decreased from thirty-two to thirty-one percent after the release of the guidelines and that high-intensity statin usage increased by only four percent.15

Reasons for the lower than expected adoption of the guidelines are not completely understood, although slow adoption of guidelines is not a new trend.16 One study suggested that there is a gap in physician understanding of the guidelines, with fifty-two percent of providers having not read the guidelines or a summary of the guidelines despite their widely publicized release.17 Another possibility is that healthcare providers are not familiar with the classification of statin intensity. A study published in 2016 found that seventy-one percent of practicing providers surveyed did not understand the definitions of low, moderate, or high intensity statin therapy.18 Finally, perhaps it is simply too soon to expect full implementation as the Institute of Medicine states it can take up to seventeen years for guidelines to be fully accepted into practice.19

According to the Centers for Disease Control (CDC) and World Health Organization, atherosclerotic cardiovascular disease remains the leading cause of death in the United States and worldwide.20,21 It has been estimated that over 15.5 million individuals in the United States alone have coronary artery disease. Every forty-two seconds an American will have a myocardial infarction, and of these, one-third will die as a result.22 It has been well documented that statin therapy reduces major adverse cardiovascular events in those with or at risk of ASCVD. A meta-analysis evaluating statin effectiveness in twenty-seven randomized trials involving 174,000 participants showed a reduction in all-cause mortality. This was primarily driven by reductions in deaths due to coronary artery disease, with a twenty percent relative risk reduction, and other cardiac causes, with a ten percent relative reduction.23

With the burden of ASCVD present, physicians should continue to prioritize prevention and treatment using lifestyle modification, risk factor reduction, and if warranted, appropriate statin therapy.