The implementation of the Patient Protection and Affordable Care Act (ACA) brought significant changes to the healthcare landscape. Many of the provisions of the ACA were intended to create greater access to healthcare services as well as to lower overall healthcare costs. One of the intentions of the ACA was to provide opportunities for patients to seek treatment at the appropriate level of care, i.e. primary care outpatient visits rather than emergency room (ER) utilization. The premise of this effort ostensibly was to lower healthcare costs by treating non-emergent illnesses at the lowest cost level. Additional provisions of the ACA such as mandated insurance coverage were intended to provide insurance coverage for patients to seek primary care services. Thus the cumulative impact of these provisions was predicted to increase access to primary care while simultaneously reducing non-emergent utilization of ER services. This study documents overall ER utilization as well as ER visits for non-emergent treatment before and after the implementation of the ACA. The analysis of the data revealed ER utilization increased in the five years (2011-2015) after the ACA went into effect compared to the five-year period (2005-2009) before the Act was implemented. In addition to the overall increase in ER visits, non-emergent visits as measured by six non-emergent, primary care diagnosis codes also increased significantly during the same evaluation period.

The evolution of healthcare within the United States over the past four decades has led to a condition of universal care based on emergency room (ER) access for patients who do not have health insurance. This condition prompted an appropriate debate whether healthcare costs could be reduced by providing greater access to primary care services, as well as by subsidizing health insurance coverage to pay for those services. The implementation of the Patient Protection and Affordable Care Act (ACA) was intended to create greater access to health care services as well as to lower overall health care costs by providing opportunities for patients to seek treatment at the appropriate level of care, i.e. primary care outpatient visits rather than ER utilization. Additional provisions of the act, such as mandated individual health insurance coverage, were intended to provide insurance coverage for patients to seek primary care services. Thus the cumulative impact of these provisions was predicted to increase access to primary care while simultaneously reducing non-emergent utilization of ER services, thereby lowering overall healthcare costs.

The data for this study was constructed by researchers at the Oklahoma State University School of Healthcare Administration and the Oklahoma State University Center for Health Systems Innovation (CHSI) utilizing the Cerner HealthFacts database. The Cerner HealthFacts database is a comprehensive source of de-identified health data from 662 hospitals across the nation and includes over 63 million patients and 379 million patient encounters.1 The data is HIPAA compliant and was collected from participating clinical facilities across the United States from 2000 to 2015. The database is a time-stamped and sequenced clinical treatment record and also includes admissions, clinical events, pharmacy, laboratory, and billing data.1 The data source is identified to specific geographic regions of the U.S.: Midwest, Northeast, West and South.1

Given that the purpose of the study was to determine whether non-emergent ER visits were reduced after the implementation of the ACA, six specific non-emergent, primary care diagnosis codes were queried for the five years prior to the ACA and for five years after the implementation of the ACA. The non-emergent diagnosis codes selected for comparison and analysis were 1) dental pain, acute respiratory infection, chronic pain, urinary tract infection, influenza and strep. The pre-ACA period was identified as the years from 2005 through 2009, while post-ACA was observed as the years 2011 through 2015. The ACA implementation year of 2010 was excluded so as not to unfairly skew the data in either direction. Researchers identified and segregated over 56 million ER visits from 2005 through 2015. The first point of analysis was to determine if ER visits in general had increased over the pre-ACA and post-ACA evaluation period. Once this condition proved positive, the total number of ER visits for the six specific non-emergent, primary care diagnosis codes were segregated by year and then categorized as either pre or post ACA for comparison purposes. Pre and post ACA utilization data was analyzed utilizing Pearson’s Chi Squared test. Additionally, to address the discrete error assumption probabilities inherent to the large sample size, the Yates Continuity Correction procedure was also included in the analysis.

The analysis of the data revealed that the aggregate number of ER visits increased in the five-year period after the implementation of the ACA compared to the five-year period prior to the implementation of the ACA. Table 1 outlines the number of ER visits for the pre and post ACA periods of time as well as the results of the statistical analysis of the data.

Table 1 reveals the difference in aggregate ER visits for pre and post ACA as being statistically significant. The second phase of the study was to analyze the occurrence of the selected non-emergent, primary care diagnosis codes for the pre and post ACA periods. Table 2 details the number of ER visits for each of the six non-emergent diagnosis codes, as well as the results of the chi square tests. 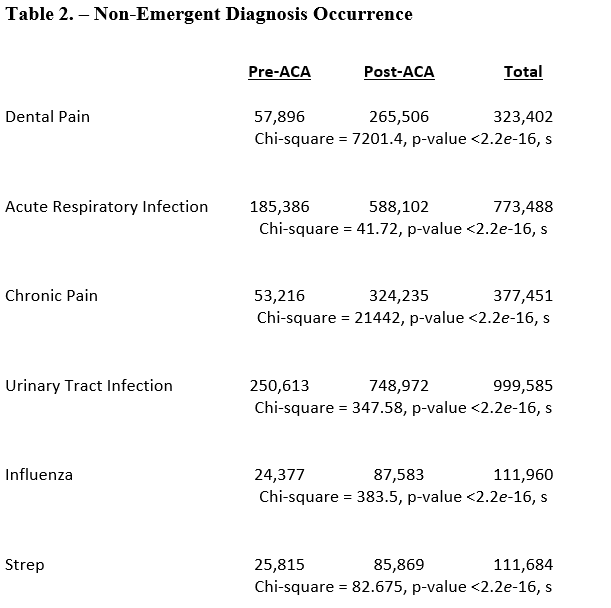 Table 2 reveals the difference in pre and post ACA ER visits for each of the non-emergent diagnosis codes as being statistically significant. The conclusions of the study are consistent with Taubman et al.2 and a more recent study conducted by Medi-Cal regarding ER utilization rates of the state’s Medicaid population where ER visits have risen from 800,000 in 2012 to over 1.4 million in 2016.3

Over the past two decades a significant amount of attention has been given to the circumstances surrounding the utilization of ER services for non-emergent clinical treatment. Prior to the enactment of the ACA, researchers attempted to better understand the ER utilization phenomena. Northington, Brice and Zou sought to determine whether patients seeking ER services for non-emergent care had PCPs of their own or were aware of other care sources and also to determine the reasons why patients chose the ER rather than another care source.4 The study concluded that although most ER non-emergent patients were not dependent upon the ER, the majority was unaware of other options to receive care.4 Patients who did have a PCP still sought care in the ER since the ER was believed to provide better care despite its perceived increase in both waiting time and cost. 4

The focus on ER utilization as a healthcare cost driver led many researchers to focus on non-emergent utilization of ER services. Uscher-Pines et al. conducted a systematic literature review of 26 studies published between 1990 and 2013 and concluded the average percentage of ED visits determined to be non-emergentwas 37%.6 The reviewed articles demonstrated the varied approaches to study design, covered populations, comparison criteria and non-urgent definitions and concluded that younger age, convenience of the ER compared to alternatives, referral to the ER by a physician, and negative perceptions about alternatives such as PCPs all play a role in driving non-emergent ER utilization.6

Researchers have been conflicted about which types of patients were most responsible for non-emergent ER utilization. Pukurdpol et al. conducted a retrospective analysis of a nationally representative sample of 241,167 ER visits from the 1997 to 2009.7 The findings implicated insurance type and arrival time in the variation of primary care–treatable ER visits.7 Although primary care–treatable classification of ER visits was most associated with uninsured or Medicaid visits, this classification increased most rapidly among Medicare visits during the study period.7 Gandhi, Grant and Sabik analyzed ER visits from 2000 to 2009 and reported that visits for Medicare enrollees were least likely to be for non-emergent reasons, while ER visits for uninsured patients were most likely to be for non-emergent reasons.8 The study concluded non-emergent ER visit rates were highest for Medicaid patients.8 Carlson, Menegazzi and Callaway analyzed data from the National Hospital Ambulatory Medical Care Survey (2006-2009) and stratified the data by insurance status to determine utilization rates as well as ER resource allocations.9 Representing 17% of all ER visits, uninsured patients had fewer diagnostic tests and procedures and fewer hospital admissions than those with insurance.9

Prior to the enactment of the ACA, many proponents pointed to the Massachusetts reform effort as a model to be emulated. It was theorized that mandated insurance coverage and greater access to primary care services for previously uninsured patients would lower non-emergent ER utilization. However, the literature is somewhat split on the impact of the Massachusetts reform effort on ER utilization. Hosseinichimeh and Weinberg compared ER use after the 2006 Massachusetts health insurance reform with ER use prior to reform both in Massachusetts and nearby states and found that while the reform increased the health insurance rate for individuals, it did not reduce ER visits. 10 Conversely, Miller concluded that the Massachusetts 2006 reform reduced ER usage by five to eight percent by decreasing non-urgent visits that could be treated in alternative settings.11 In a separate study, Miller also found the Massachusetts reform increased residents' use of primary and preventive care, reduced ER visits for non-emergent care, and improved self-reported health outcomes.12

Irrespective of patient type and payer source, the presentation of non-emergent symptoms within the ER setting was the exact circumstance the ACA was destined to address. Taubman et al. studied 25,000 patients over an 18 monthperiod and found that Medicaid coverage significantly increased overall ER use by 40% compared to a control group.2 Further, the researchers found increases in ER services across a broad range of types of visits, including conditions more appropriately treated in primary care settings.2

Also contributing to ER utilization was the number of young adults who were eligible to remain on their parents’ insurance coverage. Antwi et al. studied changes in ER utilization among young adults after the enactment of the ACA’s dependent coverage provision.13

A number of researchers have theorized that the ACA’s provisions would not decrease the rates of utilization for non-emergent purposes. Weisz et al. concluded the expansion of insurance coverage under the ACA might not be sufficient to reduce ER use for non-emergent conditions.15 Shippee et al. also reported that expanded private insurance and Medicaid coverage would not guarantee reductions in frequent ER uses.16 Additionally, Fisman found that low-income, uninsured adults randomly selected to get Medicaid health insurance coverage are more likely to utilize the ER and the ER visits increased by about 40% compared relative to those not offered coverage through the Medicaid expansion.17

While the literature seems to support both sides of the argument that the enactment of the ACA would decrease both aggregate and non-emergent ER utilization, this study provided a most comprehensive analysis of the issue. Given the large number of records included and analyzed in the study, one can conclude that the passage of the act had a dramatic impact on ER utilization.

Future research should focus on the reasons patients selected the ER rather than alternative primary care sources for treatment. Additionally, it would be worth exploring whether hospitals have indeed been financially burdened by post-ACA ER visit increases or whether those increases have actually benefited hospitals financially.

There are two specific criticisms that might be made of this study. It is possible, although unlikely, that the patients included in the database are not representative of the larger U.S. population. It is also true that the researchers relied heavily upon the coding of the ER staff as they entered clinical treatment data.

This work was conducted with data from the Cerner Corporation Health Facts database of electronic medical records provided by the Oklahoma State University Center for Health Systems Innovation (CHSI). Any opinions, findings, and conclusions or recommendations expressed in this material are those of the author(s) and do not necessarily reflect the views of the Cerner Corporation.

6. Uscher-Pines, L., Pines, J., Kellermann, A., Gillen, E., and Mehrotra, A.Deciding to visit the emergency department for non-urgent conditions: a systematic review of the literature. The American Journal of Managed Care. 2013; 19(1): 47.

10. Hosseinichimeh, N., and Weinberg, S. The effect of the Massachusetts healthcare reform on emergency department use. World Medical and Health Policy. 2014; 6(1): 9-21.