A 26-year old Caucasian female presented to the clinic with chronic pain and discomfort in the left ankle after a fall. Chief complaints were lateral ankle pain, perceived weakness, and ankle instability. The patient presented with full range of motion and strength despite persistent tenderness along the peroneal tendons. Initial treatment for the tendinopathy consisted of protected immobilization in a walker boot with anti-inflammatory medication. Unresolved pain and tenderness led to subsequent imaging studies that revealed a split-tendon tear of the peroneus brevis. The patient underwent an open repair of the left peroneus longus and brevis tendons to reduce discomfort. An accessory peroneal tendon (peroneus quartus) with an abnormal calcaneal insertion was discovered during the procedure and excised. Surgical exploration determined good health of the peroneal tendons. It was suspected that the anatomical variant contributed to the patient's lateral ankle pain. Surgical ablation of the accessory peroneal muscle produced a complete recovery and resolution of symptoms. This specific case report is unique due to the discovery of the variant accessory muscle and its location within the affected extremity.

The PQ predominantly arises from the lower third of the fibula, or even off of the peroneus brevis and/or peroneus longus muscle,11 with a more common origin from the peroneus brevis.12-13 Surgeons, radiologists, and anatomists have observed great variability of the insertion points of this muscle, including the retrotrochlear eminence of the calcaneus, the peroneal trochlea of the calcaneus, tendons of the peroneus longus and brevis muscles, the cuboid, and fifth metatarsal.6-8,14 Insertion on to the retrotrochlear eminence of the lateral calcaneus is the most common11 with one study observing the insertion on to the inferior peroneal retinaculum.15

This accessory peroneal muscle functions mechanically as a pronator of the foot,16 and acts as a lateral ankle stabilizer.12 Although infrequent; it can assume an important role of eversion of the lateral foot,16 however, the PQ is usually poorly developed or atrophied.1 The presence of a PQ muscle can also lead to other subsequent pathological complications such as lateral ankle stenosis, or predisposing to peroneal tendon tears.11 The presence of an accessory peroneal muscle can narrow the retromalleolar groove by overcrowding, predisposing the peroneus brevis to dislocation and tear.17 A study by Sobel et al., showed that the relative risk of peroneus brevis attrition was increased two fold when a PQ variant is present.6 This report describes an unusual case of chronic lateral ankle and peroneal pain that involved the discovery of an identified accessory peroneal muscle (PQ), and eventual surgical management in the treatment of this unique condition.

A 26- year old Caucasian female presented to the clinic for a left ankle evaluation. The patient had been experiencing pain in her ankle for two months following a fall, but could not recollect a specific mechanism of action related to her pain. The patient described her pain as throbbing, shooting, and tingling, with complaints of ankle weakness and feelings of instability. The initial evaluation ruled out ankle instability and the patient presented with tenderness to palpation on the distal peroneal tendons and lateral calcaneus. The patient had complete range of motion within normal limits. The patient presented with bilateral equal strength of ankle movements, but described pain along the peroneus longus and brevis tendons with resistive eversion. The patient was initially diagnosed with peroneal tendinitis and conservatively managed with protective immobilization using a stationary walker boot and anti-inflammatory medications. At an eight-week follow-up visit, the patient's pain persisted with no relief from the conservative approach to management. A magnetic resonance imaging study was conducted that revealed possible partial tearing of the peroneus longus and brevis tendons, with an apparent split tendon lesion of the peroneus brevis tendon. The patient was informed of surgical options and elected to receive an open repair of the peroneus longus and brevis tendons.

During the procedure, an accessory peroneal muscle was discovered in the base of the peroneal tunnel and identified to be a peroneus quartus variant (Figure 1). 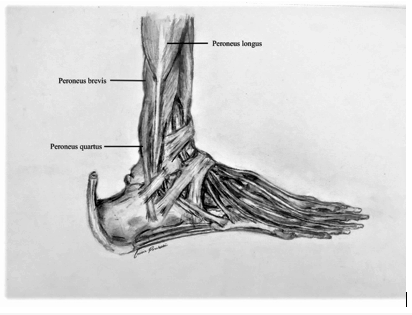 The PQ traveled parallel with the peroneus longus and brevis tendons attaching distally on an osteophyte on the lateral calcaneus. The attachment of the PQ had degeneration, split-thickness tearing, and synovitis. Further exploration and examination showed the peroneus longus and brevis tendons to be healthy and intact with no obvious pathology. Additionally, the sural nerve was free from entrapment. The PQ was excised at its insertion point with an ostectomy performed on the bony osteophyte. A portion of the PQ tendon was calcified and was dissected free and excised from the attachment. The tendon sheath and retinaculum were then reapproximated. The proximal portion was excised as high as possible and tied into the peroneus longus muscle belly.

The patient responded well to the procedure with no complications, and was discharged wearing a posterior leg splint with stirrup with non-weight bearing instructions using crutches for two weeks. After two weeks of non-weight bearing, the patient was progressed to an immobilization boot and able to progressively increase her weight bearing as tolerated using the crutches for the next four weeks. The patient was able to transition to a regular shoe at six weeks post-surgery with crutch assistance as needed. At the patient's 9-week post-operative visit, she reported resolution of her pain and tingling sensations. She reported going to physical therapy twice weekly and was attempting to discontinue use of the walker boot. She noted zero pain at this time. Two additional months passed and the patient returned for another follow-up appointment. The patient had completed rehabilitation and had 100% improvement in pain with normal sensory and motor function. The PQ traveled parallel with the peroneus longus and brevis tendons attaching distally on an osteophyte on the lateral calcaneus. The attachment of the PQ had degeneration, split-thickness tearing, and synovitis. Further exploration and examination showed the peroneus longus and brevis tendons to be healthy and intact with no obvious pathology. Additionally, the sural nerve was free from entrapment. The PQ was excised at its insertion point with an ostectomy performed on the bony osteophyte. A portion of the PQ tendon was calcified and was dissected free and excised from the attachment. The tendon sheath and retinaculum were then reapproximated. The proximal portion was excised as high as possible and tied into the peroneus longus muscle belly.

This case is unique as it presented initially with routine symptoms consistent with other published case studies of lateral retromalleolar pain9 and was initially treated for peroneal tendinitis. When conservative treatment was not successful, imaging studies revealed what was thought to be lesions in the peroneal tendons, but upon surgical exploration and repair, the PQ variant was identified. The presence of a PQ is often confused with a peroneal tendon tear, and can often be misleading in the diagnosis.1,18 The degeneration of the PQ tendon, with associated synovitis and split-tendon tearing of the PQ tendon appeared to be the source of the patient's pain. The insertion of the PQ on the retrotrochlear eminence of the calcaneus is consistent with other studies7 and likely contributed to an increase in the height and bony hypertrophy of the eminence13,16 that resulted in the ostectomy of the PQ attachment on the lateral calcaneus.

Clarkson et al. noted that longitudinal splitting of the peroneal tendons is directly associated with hypertrophy of the retrotrochlear eminence and peroneal trochlea of the calcaneus from the PQ attachment.11 Wang et al.17stated that the presence of an accessory peroneal muscle (APM) can cause overcrowding in the retromalleolar groove that predisposes the peroneus brevis to dislocation and tearing. This overcrowding phenomenon likely was present in the current case as the patient's complaints of throbbing and tingling discomfort that are consistent with nerve entrapment which has been documented in similar cases.12

During clinical imaging, the presence of three tendinous structures typically indicates either a longitudinal split tendon tear of the peroneus brevis or the presence of a PQ muscle. Figures 2 and 3 detail the original T1 weighted axial magnetic resonance images from proximal to distal, with patient identifiers removed. 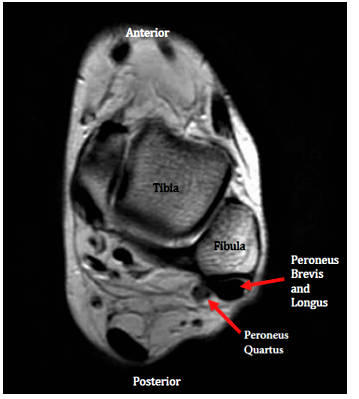 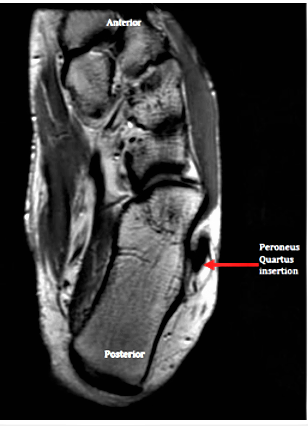 Accessory musculotindinous structures are not always symptomatic,16 although one-third of the cases with the presence of a PQ muscle had a history of symptomology of the lateral ankle region.8 It has been documented that the presence of an APM has been associated with chronic ankle pain and swelling,19-22 which was consistent with the current case. Another study also observed attrition of the peroneal tendons where a PQ was found.13 Sobel et al. reported the presence of an APM in 36% of ankles with peroneus brevis attrition.13 The APM degeneration and associated synovitis in our present case are also consistent with other published case studies.9 In the present case, split tendon tearing of the PQ and synovitis were noted, however this differs from the case presented by Sammarco et al.23 in which histological analysis of the excised APM revealed normal tissue. The PQ is generally asymptomatic and rarely causes retromalleolar attrition syndrome.9 However longitudinal attrition of the peroneus brevis tendon appears to be a rare as it was only noted in 18% of cases in which a PQ was present.13

Conservative management in our patient was unsuccessful in resolving pain and other symptoms. Until the accessory muscle was identified and removed surgically did the patient's pain levels subside. Surgical ablation of the PQ often resolves the symptoms,9,18,21,23 although some have found fasciotomy24 or conservative treatment with orthoses25 to be successful. Other studies have documented successful outcomes of pain relief after excision of the accessory peroneal tendon.9,12,23 The excision of the PQ in patients with lateral ankle pain with no peroneus brevis or peroneus longus pathology have been very effective.1

The presence of a PQ is generally asymptomatic; however rarely it can produce symptoms suggestive of tendinopathy, tendon lesions, lateral ankle stenosis, instability, swelling, and chronic ankle pain that can be misinterpreted though traditional imaging studies. Although the presence of the PQ muscle is thought to be rare, in patients with chronic post-traumatic ankle pain, instability, or strength deficits that do not improve with conservative rehabilitation, the presence of a PQ muscle should be considered as part of the differential diagnosis.26 The clinical awareness of this muscle can be highly relevant to radiologists, podiatrists, foot and ankle surgeons, athletic trainers and physical therapists. In our case, conservative therapy was not successful, though surgical ablation produced a complete recovery of function and resolution of chronic pain. We recommend proper identification of this muscle through accurate imaging and diagnosis to help improve patient outcomes.

Acknowledgements
The authors would like to thank Cassie Porebski (Osteopathic Medical Student) for her talented illustration.